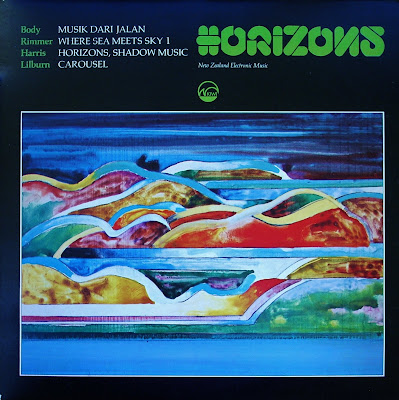 The arts in New Zealand's late-arriving modernism were unusually cross-disciplinary. In any minuscule regional arts scene, the best ideas came from sharing across specialties. The pairing of painting and poetry is the most visible (for instance, in the works of McCahon/Caselberg and Hotere/Manhire) but poets also worked with musicians (e.g. Sam Hunt and Mammal), and musicians with painters. 'Horizons' features the grand-daddy of all New Zealand electroacoustic music, Douglas Lilburn, whose lifelong conversation with painter Rita Angus fired his practice, and whose collaboration with poet Alistair Campbell birthed the first major electroacoustic work in New Zealand music history ('The Return', 1965).

On this LP, John Rimmer's piece 'Where Sea Meets Sky 1' is "a musical image of... Ian Wedde's poem 'Those Others'", and Ross Harris's 'Horizons' was commissioned by synaesthete painter Michael Smither (who also provided the cover painting for Human Instinct's 'Stoned Guitar' LP).

Jack Body takes it to the (Indonesian) street with 'Musik Dari Jalan', a transportative wedge of ethnomusique concrete. However, it is Rimmer and Harris who are probably the most comfortable with electroacoustic music as their primary medium; the sounds are complex, alien, metal-organic frameworks of crystalline compounds. Lilburn's work here is much more based in classical traditions; 'Carousel,' is lyrical and narrative even amongst its jarring timbres. As proof of his status amongst his peers, 'Musik Dari Jalan' and 'Where Sea Meets Sky 1' are both dedicated to Douglas Lilburn.

There is only a small handful of electroacoustic music available on LP from the 'classic' period of New Zealand's electroacoustic development (1965 - 1985): the 3xLP box set 'New Zealand Electronic Music', the solo LPs 'Soundscape' by Douglas Lilburn, and 'Soundweb' by John Rimmer (if anyone has this one, please let me know), and this compilation.

So, I'm making a bit of a sharp left turn for awhile here. In future, I will be posting LPs (and the occasional out-of-print CD) of New Zealand modern classical and avant-garde music (some of these records include electroacoustic works amongst works scored for more traditional instrumentation), and possibly New Zealand poetry. This blog has always been about digitising my own collection of NZ vinyl -- if it's not already available digitally, and so that I can have more opportunity to listen to it myself -- and promoting and preserving artefacts of New Zealand's cultural history which do not deserve to remain obscure.

They Kiss Only In Our Minds
Posted by Jon A. Seed at 2:45 PM